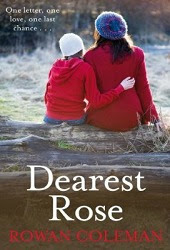 'You are a remarkable woman and you deserve all the happiness, contentment and love in the world. I, for one, know that I have never met anyone quite like you.'When Rose Pritchard turns up on the doorstep of a Cumbrian B&B it is her last resort. She and her seven-year-old daughter Maddie have left everything behind. And they have come to the village of Millthwaite in search of the person who once offered Rose hope.
Almost immediately Rose wonders if she's made a terrible mistake - if she's chasing a dream - but she knows in her heart that she cannot go back. She's been given a second chance - at life, and love - but will she have the courage to take it?

I was eagerly awaiting Rowan Coleman’s latest novel, and when it finally arrived in the post, I was in no way disappointed! To me the novel feels very different from some of her earlier offerings, if someone had told me that this was the same author who wrote ‘The Baby Group’ (my favourite of Rowan’s novels) I might not have believed them. Nevertheless, I liked Dearest Rose just as much.

The thing that stands out for me is how real the characters and the storyline seem to be. I feel as if the events that unfold could’ve been happening to someone I knew, a friend of mine, and therefore found the book very easy to relate to and equally as easy to read. The story centres around Rose and her daughter Maddie and the journey they embark upon when they find themselves suddenly removed from coastal Kent and plonked in a Cumbrian town which is both familiar and unfamiliar at the same time. There are plenty of other characters thrown into the mix, each bringing their own complications, humour and joy to the storyline.

The thing that I found really refreshing in the plot of this novel was the way that they relationship between the mother and daughter was explored. I can’t think of another book where this relationship has been exposed as much. It tends to be that yes the mother/daughter bond is touched upon, but generally other characters are involved, a father, or other siblings, but in the case of this novel there are lots of scenes where the two characters are alone, or else the mother is focusing entirely on her daughter, worrying about her or addressing problems in their own relationship.

Whilst there is the usual light-hearted romance feature of Rowan Coleman’s writing, as well as these families ties-as expected-the book also deals with some slightly more uncomfortable issues including domestic abuse. I think it can be tempting for authors to sensationalise this kind of thing in their writing, but I really love the way that Coleman deals with the issues surrounding domestic abuse in this book. There was one passage in particular which particularly rang true for me, and I think should touch many other readers out there even if they are not already fan of this fabulous author…


“The hardest part is seeing the expression on someone’s face when you try to explain to them what life was like. I can see exactly what they’re thinking, poor stupid cow. Why did she leave him at the first sign of trouble? What they don’t know is that there isn’t as first sign of trouble…Richard was slowly smothering me and I got so used to the lack of oxygen, I didn’t notice.”

This is the perfect book to be reading at this time of year, it goes especially well with a nice hot chocolate on a Sunday afternoon. Even if you haven’t read anything else by this author, I think that there is something for everyone in this book so it is definitely worth a try. And if you are already a fan of Rowan Coleman’s delicious writing, you won’t be disappointed what her latest novel has in store for you!