Review:: Do You Come Here Often by Alexandra Potter 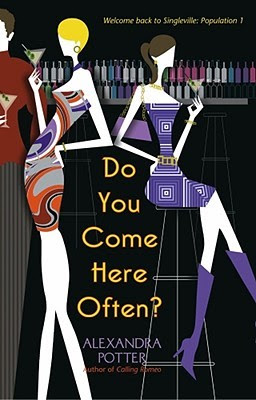 
Grace Fairley lives in South West London with her fiancé, Spencer, a divorce lawyer. They've been engaged for two years and still haven't set a date, a fact that has started to irk Grace no end. In fact, things just haven't been feeling right at all lately, and aren't they supposed to when you're with Mr. Right? Then Spencer goes and makes a fool of himself -- yet again -- on Grace's birthday, and she ends up walking to a taxi company to get a lift home. Alone.
See the guy who dumped her thirteen years ago!
Jimi Malik, a half-Indian, half-Irish writer and ladies man who lives in North West London, has surprised everyone -- himself included -- by deciding to settle down with Kylie, a twenty-one-year-old model from Canada. But when he bows out of his own stag night and goes to catch a cab home, he bumps into Grace Fairley and the past comes rushing back. Like the way they couldn't stand each other. And how their high school hair-pulling routine eventually turned into friendship, then something more. And how he never called again. She's still furious at him and he's still hot for her. But what's the harm in sharing a cab? After all, they're both getting married...Right?

‘They were right at the very beginning; they had no history, not pet names, no holiday snapshots together. They were, she realised, leaning a little closer as they walked along the pavement, a bit like a blank canvas…Imagine the fun they were going to have colouring it in.’

Having read all of Alexandra Potter’s novels, I can confidently say that this is my favourite! I laughed, I cried, I saw shades of my won love life in her writing-in short, I loved it! And above all, I feel sure that anyone who has even the slightest romantic inclination within them will love it too!

The story centres around characters Grace and Jimi who have known each other since their schooldays. But also features their friends Rhian and Clive, and Grace’s work colleague Maggie. Amongst this host of characters, I feel sure that there is someone for each reader to identify with. I loved the character of single mum Rhian because I wholeheartedly admired her tenacity and optimism towards a life which hasn’t been the kindest to her over the years. I really like the main character of Grace, although at times I found myself frustrated by her inability to notice things which might possibly be right under her nose (not wanting to give TOO much away).

To begin with, the fact that the story jumps between the characters’ storylines, and sometimes skips quite large time periods, can be slightly confusing, but it really helps keep the pace of the book, and this is one of the reasons that I found the book so enjoyable. I found myself reading large chunks in one go over a very busy week because it went along as such h a lovely fast pace, and I simply HAD to find out what was going to happen with one of the storylines, or one character in particular.

I have realise that whilst Alexandra Potter almost gives us a modern day take on a fairytale with her mix of romance and magic, she also deals a lot with being given a second chance-a second chance at life or a second chance with love, and this novel demonstrates this just as much as her other novels do. What is also refreshing with her writing is that she gives a very modern take one certain aspects of romance, recognising that modern readers don’t necessarily have the same romantic ideals as readers did when the original fairy tales were written, this line from the  book show it off to perfection… ‘Engagement rings were funny things: romantically they were a token of love, but in reality they were a modern day chastity belt.’

I could continue sharing my favourite bits from this lovely novel, but instead I would encourage you to go out and read it and allow yourself to get in this fresh, romantic story of second chances.