Review:: The Homecoming by Robyn Carr 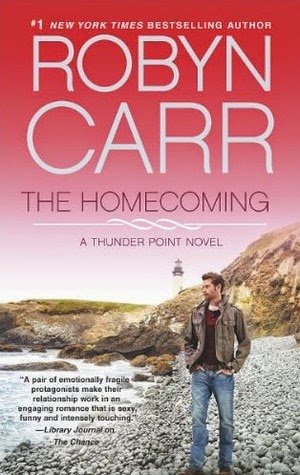 At the age of nineteen, Seth Sileski had everything. A superb athlete and scholar, handsome and popular, he was the pride of Thunder Point. Destined for greatness, he lost it all in a terrible accident that put an end to his professional football career when it had barely begun. The people in his hometown have never forgotten what might have been.

Seth has come to terms with the turns his life has taken. But now he's been presented with an opportunity to return home and show his father—and the people of Thunder Point—he's become a better, humbler version of his former self.

Winning over his father isn't the only challenge. Seth must also find a way to convince his childhood neighbor and best friend, Iris McKinley, to forgive him for breaking her heart. With his homecoming, will Seth be able to convince the town, his family and especially Iris that he's finally ready to be the man who will make them all proud?

Review::
I'm a huge Robyn Carr fan and I'll read whatever she writes. I've loved this new Thunder Point series. The town is a perfect distraction. I'm also a big fan of second chance stories. This one was a win win for me.

Seth and Iris were both very relatable. I think we all have had our lives turn out different that we'd originally thought. I'm sure most of us have had that crush that went on far too long and ate up much of our hearts and thoughts. Seth and Iris just worked. I was rooting for them the whole time.

One reason I love Robyn Carr stories is that she brings in so many other character's they aren't minor either. They add depth to the story and give us a bigger picture. Thunder Point is a character. Not just a setting. Which is why I keep coming back.

Posted by MARY IN SCOTLAND 0 comments

Review:: Taken With You by Shannon Stacey 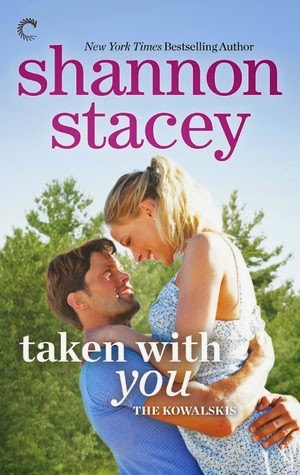 Hailey Genest has seen most of her friends marry and have babies, and she's happy for them, but it was a lot easier before she hit forty. She's spent her entire life in Whitford, Maine, and if she hasn't found her Prince Charming by now, she has to accept she's probably not going to. When a new friend suggests they go on an adventure and embrace being single, Hailey agrees.

Surviving in the woods is game warden Matt Barnett's idea of a relaxing vacation. But when he meets two women in need of help, he leads them back to safety - a task that proves more fun than expected, thanks to a certain hot blonde. He can't resist pushing her buttons, even though she's made it clear that the rugged, outdoorsy type just isn't for her.

Hailey is glad to see the back of her tempting-tour-guide-slash-pain-in-the-ass. When he shows up in her life again, she's determined to avoid him, no matter how good he looks in his uniform. But that's easier said than done in Whitford, especially when he's renting the house right next door...

Review::
There is something about the Kowalski family saga that I can't get enough of. I love the town and I feel connected to it. It makes jumping into a new novel easy and comfortable. Which is why I just knew I'd love this one just as much as the others.

This story is about the town librarian--she's not a Kowalski. I've been dying to reader her story for the past few books now and I knew it would be good. The leading man on the scene is Matt--he's a game warden. That means he is out in the woods a lot. I can't tell you how much I like that!

This books had great characters, a great pace, and is every bit as good as any of the other Kowalski books. I was looking for something to hit the spot and Shannon Stacey never disappoints. She was my first romance novel and I'm still coming back for more. This is a book I will be re-reading for sure.

Posted by MARY IN SCOTLAND 0 comments