Review:: You're the One That I Don't Want by Alexandra Potter 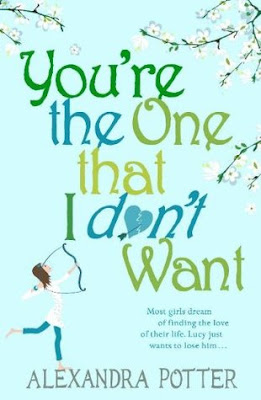 Title: You're the One That I Don't Want
Author: Alexandra Potter
Publisher: Hodder
Pages: 400
Review by: Catriona

What if you found your soulmate...and then discovered you couldn’t lose him?When Lucy meets Nate aged 18, it is love at first sight. As far as she’s concerned, he’s The One. Caught up in the whirlwind of first love, they kiss under the Bridge of Sighs in Venice at sunset and – according to the legend – are tied together indefinitely. But ten years later, they’ve almost forgotten about each other. That is, until fate starts to bring them together. Again. And again. And again. It doesn’t seem as wonderful as it had before, but if Nate’s not The One – then why on earth is it proving so hard to break up with him?A funny and magical romantic comedy about what happens when every girl’s dream of finding her dream man comes very true indeed...

Review:
I have had this book on my shelves since it first came out, but since I have been on an Alexandra Potter binge recently, I was glad I had left it there, ready and waiting to give me a hefty dose of this wonderful author! The story centres around Lucy who is living the fabulous single life in New York City but it still hung up over her first love from her teenage years Nate. When Lucy bumps into late early on in the novel, however things don’t seem as wonderful as she remembers them to be. Once that first connection is made, she doesn’t seem to be able to get rid of him and goes to all sorts of lengths, sometimes with disastrous yet hilarious consequences to try and stop bumping into this now undesirable ex.


Alexandra Potter’s novels are always page turners and so prove to be really quick reads even if you don’t intend them to be, the kind of book that you find you get the slow train to continue reading ‘just one more chapter’! This book was no expectation, and is full of the kind of mystery and magic that seems to be found in most of her novels. The fact that Lucy can’t get rid of her ex-lover seems much less of a coincidence and much more the work of an ancient tradition put upon the couple on a trip to Venice.


The setting of this novel is also a fabulous indulgence. I love novels set in cities, especially those set in New York, I love being able to picture myself walking the streets along with the characters and wish that I could be holed up in some of the kitsch apartments that this author’s heroines always seen to reside in with kooky flatmates going out on dramatic dates with new found flings! This novel offered all of that and so I found it to be the usual elating escapism that I come to expect from Alexandra potter. Another hit for her!