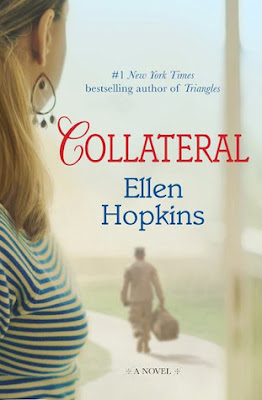 Written in Hopkins’s stunning poetic verse style, Collateral centers on Ashley, an MFA student at San Diego State University. She grew up reading books and never dreamed she would become a military wife. One night she meets a handsome soldier named Cole. He doesn’t match the stereotype of the aggressive military man. He’s passionate and romantic. He even writes poetry. Their relationship evolves into a sexually charged love affair that goes on for five years and survives four deployments. Cole wants Ashley to marry him, but when she meets another man, a professor with similar pursuits and values, she begins to see what life might be like outside the shadow of war.

Review:
This isn't something I normally read but I wanted to try something new and see what I thought. This is what I imagine life of a military spouse is actually like. It is heart breaking. I don't think I could do it. Not ever. Not even in the name of love.

The narrator felt real. I felt like Ashley was actually talking to me and telling me her story. And I hated it. I wanted so much for things to work out. I wanted so much for things to not be so hard. I wanted her to move on and make something of herself. I wanted Cole to stop being so selfish. I wanted to understand why anyone serves in the military. I felt grateful for their service to protect me. But, I don't think they understand what they are leaving at home. I also don't think we at home understand what our soldiers are going through in the field. It is just a catch 22. A big tangled web of a mess. I didn't know which person should have my allegiance.

I didn't see much character development. I saw Ashley just being selfish but maybe that is what happens when you have to share your solider with everyone. Mostly the government. I wanted to see Ashley and Cole actually "do" something with their life. I felt like they were always just waiting to be together. They measured their life in deployments. The book was far too political for me.

I'll say that this book is terribly cliche. In the sense of a soldier coming back with PTSD and turning abusive and violent. I wanted to see something different. The ending was abrupt and I honestly expected something much more. It was just...BAM...over. Too many unanswered questions.

This wasn't really my thing, but I did enjoy the whole audiobook. I listened intently and it brought a lot of feelings up for me.