Review:: The Mystery of Mercy Close by Marian Keyes 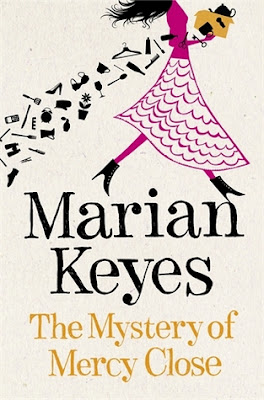 
Helen Walsh doesn’t believe in fear – it’s just a thing invented by men to get all the money and good job – and yet she’s sinking. Her work as a Private Investigator has dried up, her flat has been repossessed and now some old demons have resurfaced.

Not least in the form of her charming but dodgy ex-boyfriend Jay Parker, who shows up with a missing persons case. Money is tight – so tight Helen’s had to move back in with her elderly parents – and Jay is awash with cash. The missing person is Wayne Diffney, the ‘Wacky One’ from boyband Laddz. He’s vanished from his house in Mercy Close and it’s vital that he’s found – Laddz have a sell-out comeback gig in five days’ time.

Things ended messily with Jay. And she’s never going back there. Besides she has a new boyfriend now, the very sexy detective Artie Devlin and it’s all going well, even though his ex-wife isn’t quite ‘ex’ enough and his teenage son hates her. But the reappearance of Jay is stirring up all kinds of stuff she thought she’d left behind.

Playing by her own rules, Helen is drawn into a dark and glamorous world, where her worst enemy is her own head and where increasingly the only person she feels connected to is Wayne, a man she’s never even met.

I hate to say it but I found this book tough going. I think that perhaps my expectations were raised because I love all of Marian Keyes’s other novels and so I was waiting with baited breath for this novel to come out, but when I began to read, I found myself distracted rather than consumed by what was on the pages. I finally discovered that I preferred the flash backs in the book rather than the storyline which was running along in the present day, and so this is how I managed to get all the way to the end, and those parts of the book I did actually find enjoyable.

The story involves the youngest member of the Walsh Family, Helen, and her work as a private investigator. We know that Helen has struggled with depression in the past, and so it centres on her overcoming this depression and her trying to find out what mystery did actually take place to the resident of Mercy Close! I really enjoyed getting into the head of Helen, and living the story through her own thoughts and feelings, although at times I found myself dragged under b y her black mood, but this simply shows what a brilliant writer Keyes is in that she was able to do that to me.

The mystery aspect of the book is also very well written and I am sure that this will appeal to those outside of Marian’s usual audience, therefore allowing more readers to access this book than just those who were fans of her previous writing. I’m not a massive fan of mystery or crime within novels and so I found myself getting a bit lost during the parts to do with the disappearance. It was a bit like everyone knew something that I didn’t and it made me feel alienated, whereas the parts where Helen was having flashbacks to the time during the height of her depression, I felt included, like I was inside her head, getting to know her through her thoughts and feelings.

I am sure that fans of Marian Keyes will enjoy the catch up with the Walsh family, and the Irish references that are included. As I have mentioned, I think that this dabble into mystery writing will bring her readers who have not previously accessed her novels. This book wasn’t for me, however, I prefer to be drawn into a story right from the start, not alienated and confused by some, skipping through these to get to others. A bit of a let-down.