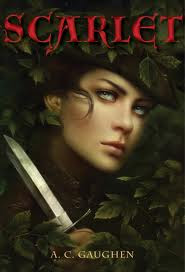 A special Thank you to Walker Books and NetGalley for sending me this books to review.

Robin Hood is given a fresh, feminine twist in this romantic retelling from the point of view of "Will Scarlet"
Many readers know the tale of Robin Hood, but they will be swept away by this new version full of action, secrets, and romance, from debut author A. C. Gaughen. Posing as one of Robin Hood's thieves to avoid the wrath of the evil Thief Taker Lord Gisbourne, Scarlet has kept her identity secret from all of Nottinghamshire. Only the Hood and his band know the truth: the agile thief posing as a whip of a boy is actually a fearless young woman with a secret past. When the heat turns on up the band of thieves as the Sheriff of Nottingham seeks revenge, the romance burns strong between Scarlet and her flirtatious fellow outlaws. Helping the people of Nottingham could cost Scarlet her life as Gisbourne closes in. It's only her fierce loyalty to Robin—whose quick smiles and sharp temper have the rare power to unsettle her—that keeps Scarlet going and makes this fight worth dying for.

Christy's Review:
I can’t begin to describe how much I liked this book! It’s like These is My Words (after a fashion) meets Robin Hood, meets Kristin Cashore’s Fire. I inhaled this book in a day! I really enjoyed the idea of Robin Hood told by Will Scarlet (a character who very little is actually written about in the original Robin Hood book, save that he is Robin’s best mate), who is actually a girl. Very, very cool idea. The voice and style given to this story by A.C. Gaughen is utterly convincing and gut-wrenchingly believable. Her use of colloquial English really completes and polishes the story. It’s a story about love, redemption, facing one’s demons and seemingly doing the wrong things for the right reasons; in other words, it is a worthy Robin Hood novel. Really, really well done.

If you’re a fan of Robin Hood and ready for a fresh take on his adventures, or are just looking for a good action/adventure/romance, definitely check out Scarlet!

Quote:
“’I’m not the type to have someone.’ Why were I saying this so much these days? I looked at Robin, John, and Much up ahead. They were someones, to be sure, but that didn’t mean they were for me. They were with me, maybe, but not for me.
‘More people care about you than you know, Scarlet. No matter how you got your scars.’
I covered my cheek, looking at her.
‘Not just those scars. The ones that make you think you’re unlovable.’”