Audiobook: Harry Potter and the Sorcererr's Stone by JK Rowling 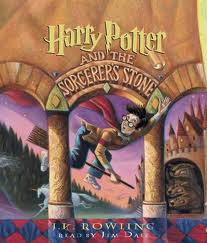 Just when it seems that there cannot possibly be another twist to the Harry Potter tale, Stephen Fry dons his haughtiest and naughtiest tones to bring Harry Potter and the Philosopher's Stone to vibrant life on audio.

Harry Potter has spent the first 10 years of his life at the mercy of the dreadful Dursleys--the aunt, uncle and fat, spoilt brat of a cousin who reluctantly gave him a home after the death of his mother and father. But on his 11th birthday Harry discovers that he is no ordinary boy, and despite the best efforts of his hideous relatives he escapes to Hogwarts School of Witchcraft and Wizardry to begin his new life as a trainee wizard. And the rest, as they say, is history...

As Harry battles against the evils thrown in his path, Stephen Fry injects the proceedings with a wry, dry and extremely contagious humour that perfectly suits the tale, wringing out the best in Harry and his cohorts as they get to grips with their new lives at the sharp end of Hogwarts. Fry's innate upper-class drone is perfectly suited to the telling of this most magical tale, cracking into the high-pitched squawking of Hermione the swat, or the gentle tones of the firm but fair Dumbledore, or the evil sniping of slimey Snape at precisely the right moments.

Audiobook Review:
I've been wanting to re-read The Harry Potter series for so long but the books are so large.  I knew it would take awhile as I'm trying to get through my TBR review pile. I am ashamed to say that I've not read the last 2 books in the series. I know, I must be some kind of traitor to the HP lovers everywhere. It was time. I wanted to read them. What better way than to try the audio book? I've only ever really tried a few audio books.  But, let me tell you. The narrator makes ALL the difference. I am so monumentally impressed with this audio book I almost have no words.

I first read Harry Potter when I was 19 yrs old (1999). Whoa! I remember the first time I saw the book. I was working at Applebee's and serving a mother and son. He was probably 8 yrs old and he had this huge book. I said,"That's quite a big book don't you think?" He said,"It's Harry Potter." I went home thinking, who is Harry Potter? I called my Mom and told her that I'd seen a kid reading a huge book. My Mom said,"It's probably Harry Potter." How did she know?! Well,  my mother is a reader. Nothing gets past her.

It has been a long time since I've revisited Harry Potter in text. I've enjoyed all the movies. But, I wanted to read the last 2 books and I want to start at the beginning. I'm so enjoying the audio books! I have forgotten how wonderfully these books are written. Pure Brilliance! But let me tell you, the narrator makes all the voices. He does a superb job. It has really changed the stories for me. I'm enjoying them so much more than before. If you've never listened to an audio book, please start with Harry Potter! It's amazing!