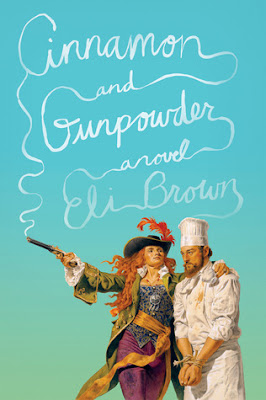 Synopsis:
A gripping adventure, a seaborne romance, and a twist on the tale of Scheherazade—with the best food ever served aboard a pirate’s ship. The year is 1819, and the renowned chef Owen Wedgwood has been kidnapped by the ruthless pirate Mad Hannah Mabbot. He will be spared, she tells him, as long as he puts exquisite food in front of her every Sunday without fail.
To appease the red-haired captain, Wedgwood gets cracking with the meager supplies on board. His first triumph at sea is actual bread, made from a sourdough starter that he leavens in a tin under his shirt throughout a roaring battle, as men are cutlassed all around him. Soon he’s making tea-smoked eel and brewing pineapple-banana cider.

But Mabbot—who exerts a curious draw on the chef—is under siege. Hunted by a deadly privateer and plagued by a saboteur hidden on her ship, she pushes her crew past exhaustion in her search for the notorious Brass Fox. As Wedgwood begins to sense a method to Mabbot’s madness, he must rely on the bizarre crewmembers he once feared: Mr. Apples, the fearsome giant who loves to knit; Feng and Bai, martial arts masters sworn to defend their captain; and Joshua, the deaf cabin boy who becomes the son Wedgwood never had.

Cinnamon and Gunpowder is a swashbuckling epicure’s adventure simmered over a surprisingly touching love story—with a dash of the strangest, most delightful cookbook never written. Eli Brown has crafted a uniquely entertaining novel full of adventure: the Scheherazade story turned on its head, at sea, with food.

Christy’s Review:
It’s rare to encounter a novel that is a product born of craftsmanship and love these days. Gunpowder & Cinnamon is a true work of beauty; a story written so tenderly, with such care that one can’t help but be completely enraptured by the world presented. This is story telling at it’s best and there is so much more to it that meets the eye!  Food, pirates, the Opium trade (and Britain’s involvement in it), the ocean and a love for most of those things are the subjects of Brown’s  caring ministrations in this profession of amour. Truly, the historical and food detail packed into this can be considered nothing short of obsessive on the author's part. And said obsession gives the reader a full-bodied reading experience that won't soon be forgotten. I could not get enough of the saffron-sauced dishes, the swashbuckling sass or the haunting, lore-filled world of pirates, privateers and one shanghaied chef!