Audiobook Review:: The Girl Who Played With Fire by Stieg Larsson 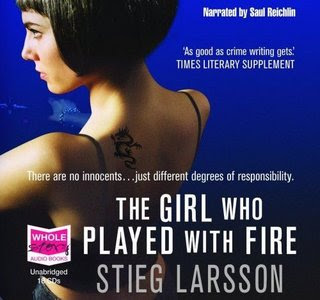 Mikael Blomkvist, crusading journalist and publisher of the magazineMillennium, has decided to run a story that will expose an extensive sex trafficking operation between Eastern Europe and Sweden, implicating well-known and highly placed members of Swedish society, business, and government.But he has no idea just how explosive the story will be until, on the eve of publication, the two investigating reporters are murdered. And even more shocking for Blomkvist: the fingerprints found on the murder weapon belong to Lisbeth Salander—the troubled, wise-beyond-her-years genius hacker who came to his aid in The Girl with the Dragon Tattoo, and who now becomes the focus and fierce heart of The Girl Who Played with Fire.As Blomkvist, alone in his belief in Salander’s innocence, plunges into an investigation of the slayings, Salander herself is drawn into a murderous hunt in which she is the prey, and which compels her to revisit her dark past in an effort to settle with it once and for all.

Review:
I'm trying out new genre's this year and I've never read a suspense/mystery novel. I'd seen the film The Girl With the Dragon Tattoo and loved it. I wanted to give the books a try. At 21 hours I knew this was a big book and it would take me awhile to get through it, but it wasn't hard. The writing is just so good. The story keeps you thinking and wondering what the heck is going on. The story is graphic. Graphic in ways that make me uncomfortable, but the story line is so good that I couldn't help but keep listening.

Narrator Saul Reichlin is a master reader. He did so many different voices that I actually felt like I was watching the film. I knew exactly who was speaking the whole way through. It amazed me how good this narration was.

No matter how much I thought about it, I could never have come up with the ending of this mystery myself. I hadn't even thought of its possibility! It all came out of nowhere! I couldn't find the connection. It was brilliant. I want to see this as a film. It would be amazing!