Simon and Schuster invited The Sweet Bookshelf to a  blogger event in London, so I sent Catriona {our Thursday reviewer} on assignment to attend. Awesome right?! She got to rub shoulders with authors and learn about new and upcoming books. She also got a stack of books to take home to review! She had a great time and I'll let her tell you all about it.


On Thursday 1st November 2012 a group of book bloggers were invited to Simon and Schuster Publishing House in to meet four different authors (as well as each other). I was lucky enough to attend the event on behalf of The Sweet Bookshelf.

To begin with, it was just fabulous to meet some of the other bloggers out and there and put some faces to some blogs, so to speak, and it was great to find out that so many of them were aware of The Sweet Bookshelf as well! Then the real fun began, however, as we were all lead into a room to be presented with authors Ali Harris, Rob Ryan, Dean Crawford and Wendy Wallace.

Dean Crawford introduced his book Apocalypse first of all, a fantasy crime novel featuring recurring character Ethan Warner where a private Learjet filled with scientists travels across the ocean toward . As it passes through the Bermuda Triangle, strange effects disturb the instruments and violent weather envelops the aircraft until it plummets out of control and vanishes without trace. Dean talked about how lucky he feels to be a full time writer and how he enjoys the fact that he can create worlds in his writing for others to enjoy.


Robert Ryan introduced his book Dead Man’s land set in the First World War, featuring a detective doctor and a mysterious murder. I found him to be thoroughly entertaining as he talked about his wife knowing how  good a writing day it had been for him based upon the cups of tea that he had drunk. He also talked about the transition from journalist to author, and how he still found it hard to believe that he is allowed to make things up in his novels. This author also confessed to working at weekends and sometimes leaving the dinner table if a good idea suddenly popped into his head, showing how being an author is a far cry from a 9-5 desk job!

I was interested to meet Wendy Wallace having read the first couple of chapter of her novel The Painted Bridge, a novel set inside a mental asylum for women in Victorian London, ‘in a world where the line between madness and sanity seems perilously fine.’ She had also been a journalist in the past, and spoke about how he enjoyed being a full time writer, but felt she couldn’t have written her novel whilst her children were younger as Ali and Rob have done. 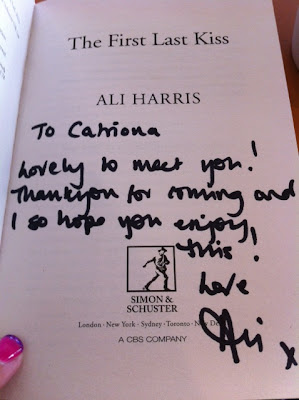 I was most excited to hear from Ali Harris because I really enjoyed her debut novel Miracle on . She told us all about her new novel which comes out in January, The First Last Kiss (which I admit to reading on the tube on the way home). It follows two main characters Molly and Ryan, and is told through Molly’s memories of kisses she has had, rather than going through in chronological order. Ali said that the best thing about being a writer is living her dream. She also come from a journalistic background and said that she experienced a lot of rejection but that the moment that she got the call to say someone had agreed to publish her novel, was the best feeling in the world. As a mother of two young children she said that she found that the hardest part of the job, and can remember proof reading her novel when her daughter was just a week old.

All of the authors shared some tips for budding authors. Ali said that the most important thing she has found is to have a plot for her book. Before she was published, she said she just used to write and write (she’s a big fan of lots of description in her writing) and that sitting down and deciding on a plot, she sees as the key to her getting published. Rob warned that listening to those around you as they’re reading your work isn’t always a good thing, and he relies on his own criticism of his work, as friends and family just want to be nice to you. Ali disagreed with this and said that without the help of her best friend, her latest novel may not have come together in the way that it has done, telling us that they locked themselves in a room together and decided the order of the book through a series of sticky notes laid out around the room!

It was so fantastic to hear what the authors had to say, but afterwards we were given the opportunity to chat to them, and the other bloggers whilst enjoying the wine and cheese that Simon and Schuster had laid on for us, and most importantly browse the variety of books that had been left out for us to take home with us. I was very excited to get my hands on a copy of Milly Johnson’s A Winter Flame, as well as Stephen Chbosky’s The Perks of being a Wallflower and Rebecca Chance’s Bad Angels. We were also able to get the authors’ latest books signed by then and Ali wrote me a lovely message in the front of my copy of The First Last Kiss.

It was completely fabulous to meet the authors, get my hands on all those books and also to chart to other book bloggers about their books and what they are reading at the moment. I am very grateful to The Sweet Bookshelf for sending me to the event and to Simon and Schuster for laying that all on for us. I am about halfway through my copy of The First Last Kiss by Ali Harris so look out for a review as soon as I am finished reading it! 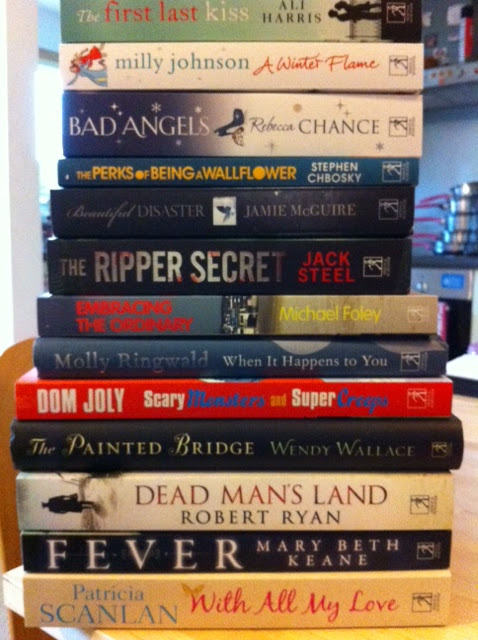 Email ThisBlogThis!Share to TwitterShare to FacebookShare to Pinterest
Labels: Event