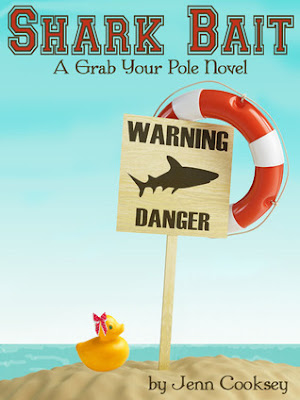 Previously homeschooled Camie Ramsey is being shoved into the shark-infested waters of public high school, where even helium filled, penguin bespeckled arm floaties likely won’t help keep her inexperienced, fifteen-year old head above water in that rip current of hormones and emotions.Camie’s worldly wisdom might be severely lacking (i.e., the closest she’s come to being kissed was sitting too close to the TV whilst Jake Ryan leaned in to give Samantha that fateful 16th birthday kiss), but she does understand her only hope for survival is if she’s thrown some kind of “social” life preserver before she sinks like a freaking rock. However, what will her fate be when she endeavors to flag down the only lifeguard on duty, the enormously popular and ridiculously beautiful Tristan Daniels? The most sought after and virtually most unattainable guy in school who not only makes Camie’s heart flatline on a recurring basis, he’s also the one guy who seemingly doesn’t know she exists.Feeling like an inept piece of chum that could ultimately be swallowed by Jaws, can Camie get Tristan to rescue her from floundering in the treacherous deep, or is she destined to be Shark Bait?

Review:
From the first few pages I knew I was going to love this book. The voice is the most realistic teenage voice I've ever read. The inner dialogue is so uncanny. I'm sure I've had many of the same conversations with myself. It was also really hilarious. There are so many great one liners. "I smell a fart face." Just think about what kind of face you make when that happens. See? I love the one liners. I wanted to highlight them all just so I could go back and re-read them anytime I want. Or use them in a conversation at some point in my life. I'm not all that witty, but I wish I was.

During the book we are educated on the finer music and lyrics from some of the greatest bands and songs of all time. Many I knew {I did grow up in the 80's} but many were new to me as well. I found myself on youtube more than once checking out the songs Camie and Tristan were talking about. If you like film or TV you'll also get an education. The classic movie lines were all there. I was loving it. It was a really creative way to set the stage. It was almost as if the music/films were another character. Well played author Jenn Cooksey. Well played.

From the get go I loved Camie and Kate's plan. This is something we all wish we could have done in high school. I'm sure we've all done some similar, but I didn't have any success! It was really fun waiting and watching the events unfold. Does he like her? What does that mean? Oh no he didn't!! I felt like I was in high school again. But in a good way. And I don't EVER want to go back to high school.

I was a bit put out by a few things though. I felt Camie changed a lot. And not in a good way. On the very first page she said she doesn't swear. That her vernacular is so vast she needn't use it. By the end of the book she was cussing like a sailor. She'd never been kissed but by the end of the book I thought she was kind of slutty. I really did. Maybe I'm just naive, but I don't think a 15 yr old girl should be doing stuff like that. AND...where were the parentals?!?! I mean, they were there but they sure as heck  weren't being parents. I'd have crapped a brick if my son came home doing even one of those things. These "kids" were quite adult in my opinion. I don't think we should normalize under age drinking and sex. I just don't. I felt Camie's character had gone down by the end of the book. I didn't respect her like I did in the beginning. It felt like she was conforming to what everybody else was doing just to fit in. I was actually disappointed in her by the end.

I did enjoy this book very much. The voice is just the best part. I could see myself saying so much of the same things. Or having thought them at least. It was just a really fun book. I'm really looking forward to the next one!

*I wouldn't say this book is appropriate for those under the age of 16 {at least!}.