Christy's Review: On the Jellico Road by Melina Marchetta 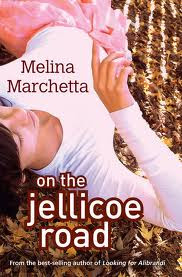 On the Jellicoe Road

Abandoned by her mother on Jellicoe Road when she was eleven, Taylor Markham, now seventeen, is finally being confronted with her past. But as the reluctant leader of her boarding school dorm, there isn't a lot of time for introspection. And while Hannah, the closest adult Taylor has to family, has disappeared, Jonah Griggs is back in town, moody stares and all.
In this absorbing story by Melina Marchetta, nothing is as it seems and every clue leads to more questions as Taylor tries to work out the connection between her mother dumping her, Hannah finding her then and her sudden departure now, a mysterious stranger who once whispered something in her ear, a boy in her dreams, five kids who lived on Jellicoe Road eighteen years ago, and the maddening and magnetic Jonah Griggs, who knows her better than she thinks he does. If Taylor can put together the pieces of her past, she might just be able to change her future.

Christy's Review:
Melina Marchetta is quickly becoming one of my favorite authors. Jellicoe Road is a great book for teenagers (and up). The character of Taylor Markham was so well crafted that I feel she could be sitting beside me now. The pacing of the book and the storytelling were utterly enrapturing.

Three things to look out for:
1. It will take a while to “get into” the book. It’s immediately confusing. Clarity comes with time and your patience ultimately pays off in dividends. I hadn’t read any kind of synopsis about this book before starting it, so I was a bit more confused than I could have been.

2. The author is Australian, so be prepared for some Aussie slang throughout.

3. There are two (seemingly gratuitous) instances of teen sex. I’m not sure why they’re included in the book. Everyone knows that Teens have out-of-control hormones. These scenes don’t add to the story. They could have just as easily have been left out.

By and far, I found the world that Marchetta created to be completely convincing. I felt she really understood her character and the world that character lived in. Marchetta has a knack for writing about serious, troubling topics in a way that isn’t too heavy and also doesn’t make light of them; they simply do happen in life, leaving the people they happen to behind to pick up the pieces. Want to know how the world looks from the perspective of a teen who has been abandoned? Want to know how that teen survives day to day and what kind of universe she creates for herself? Want to also be utterly fascinated by what you’re reading? Read this book.

After you’re done with Jellicoe Road check out her newer project, a brilliant delve into the Fantasy genre, Finnikin of the Rock.