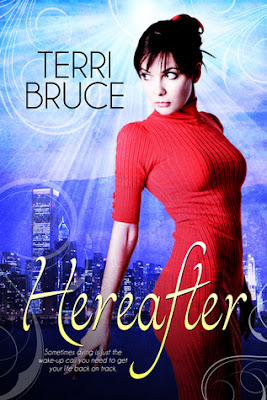 A special Thank you to author Terri Bruce for sending me her book for review.

Why let a little thing like dying get in the way of a good time?Thirty-six-year-old Irene Dunphy didn't plan on dying any time soon, but that’s exactly what happens when she makes the mistake of getting behind the wheel after a night bar-hopping with friends. She finds herself stranded on Earth as a ghost, where the food has no taste, the alcohol doesn’t get you drunk, and the sex...well, let’s just say “don’t bother.” To make matters worse, the only person who can see her—courtesy of a book he found in his school library—is a fourteen-year-old boy genius obsessed with the afterlife.This sounds suspiciously like hell to Irene, so she prepares to strike out for the Great Beyond. The only problem is that, while this side has exorcism, ghost repellents, and soul devouring demons, the other side has three-headed hell hounds, final judgment, and eternal torment. If only there was a third option...

Review:
This book is witty and fun! Irene needs a little help getting to the afterlife and Jonah is going to help her get there. The interaction between these two characters is a bit of a give and take that is dripping with sarcasm and smart a$$ comments. Really fun to watch. Reminds me of a brother and sister relationship.

A lot of research must have gone into writing this book because the religious aspects were all there. There isn't just one way to get to the afterlife. A little bit of everything was there and it was refreshing to see. So many paranormal's have been done over and over. The same 'ol thing. Hereafter is a rejuvenation of the genre. Something different! Finally! I enjoyed it!