Audiobook:: Above and Beyond by Sandra Brown 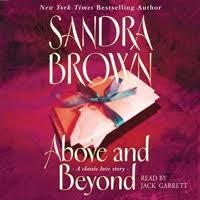 
A special Thank you to Simon and Schuster Audio for sending me this book to review.

The letters Kyla sent to her husband, Sergeant Richard Stroud, stationed a world away, spoke of a love that stretched across the ocean and held the young couple together. But when tragedy ended their marriage too soon, Kyla was left a widow with a newborn son. And Richard left behind only a metal box filled with his wife's declarations of love.

Trevor Rule had been Richard's best friend. Returning home from military duty, he carried with him the letters Kyla had sent. And with each one he read, he fell more in love with the gentle, passionate woman who had penned them. Now, he needs to convince Kyla of his feelings, and that they both have the right to be happy, to move past the tragedy of Richard's death.
Review:
Upon first listening to the narrator Jack Garrett I couldn't help a smile and a giggle. His voice is so very 1990's Danielle Steel-ish. Smooth and sexy. I knew this book was going to be fun.
The dialogue is a bit dated. Really. Nobody talks like that. Not even in their inner dialogue they aren't that cheesy, but that doesn't mean that the story line isn't good. It just took a bit of getting used to. Once I was acquainted with the narrator and the feeling of this story we were off and running.
I totally felt a pull toward Kyla and Trevor's relationship. I wanted them to work out and be together. If she could just put her feelings for her dead husband on the back burner they'd be OK. He was the perfect man. Always picking up after himself and helping with the baby {not realistic but this is fiction}. There were times when I wanted to smack Kyla upside the head. Girl, what's wrong with you?! Snap out of it! I also wanted to tell Trevor to take what was already his. I liked feeling a connection with the characters and wanting them to be together.
I found myself doing the housework just so I could listen to more of the book and then I didn't want to stop and so I listened until 3am in bed because I had to know what was happening. Narrator Jack Garrett's voice had sucked me in. Although a bit dated and cheesy, this was a good audio book to enjoy while doing the dishes and folding the laundry. This is my first Sandra Brown and I'll be reading more!