Teaser Tuesday: I've Got Your Number by Sophie Kinsella

Teaser Tuesday is an original meme from Should Be Reading 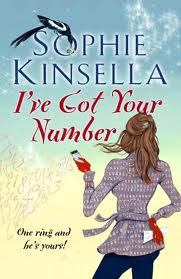 "I have no idea what to say next. I don't speak Japanese, I don't know anything about Japanese business or Japanese culture. Apart from sushi. But I can't exactly go up to him and say "Sushi!" out of the blue. It would be like going up to a top American businessman and saying "T-bone steak!"