Review: The Most Important Catch by Jaclyn Hawkes + eBook Giveaway 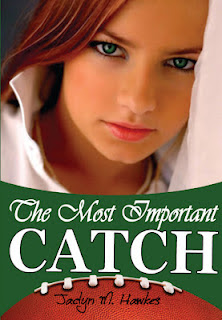 A special Thank you to The Book Bug for sending this book for review.
Run or die!
She knew too much, and she’d seen too much.
And the police refused to help.
Knowing that she was to be the next scheduled death, Kelly Campbell hid under head to toe black leather and a tinted motorcycle helmet and ran for her life.
When the weather turned cold, she turned south.
She ended up in North Carolina, home to one of the most famed and eligible NFL football stars in the whole league; only she didn’t know that. She thought he was a businessman. Not being a huge fan, all she knew was that he was incredibly attractive, kind, generous, and that she was safe with him.
Or was she?
His brand of fame proved to be all but deadly, but his fame wasn’t nearly as lethal as his attraction. He kept her safe and protected. All except for her heart.
Review:
I have a lot to say about this book. This is a Latter-day Saint contemporary romance and I really do enjoy them. I'm a Mormon--if you didn't know--and I do like stories about my own peeps. The religious aspect is kept to a minimum and I also like that. It isn't drowning in stereotypes. The main characters just happen to be of a certain religion. That's it.

The cover is pretty good. Matches the story. That's important. I would have liked to have had a cover with the gorgeous long red auburn hair that Kelly has. It is a feature talked about the whole of the book. Now I wish I had red hair!! Like Anne with an 'E'.

The story starts out with Kelly seeing some illegal activity and she needs to literally run for her life. At the beginning I wasn't quite sure if this felt plausible. I wasn't truly feeling the danger she was in. It became more apparent at the end of the book just how much though. Kelly finally needs to stop in a small North Carolinian town. She gets a job as a caretaker of an old farm house. This is where the story got good for me.

I honestly think it would be amazing to fix up an old farm house. I'm from the east coast and I miss it a lot. I miss the simpleness of life. You'll get the feeling of that here. One thing that did bother me was that Kelly seemed to be a contractor by trade, to do everything she was really doing. Alone at that. One line did actually offend me. Kelly says, "...construction isn't the most technical of all occupations and decided to try my hand at it." Um...OK! I've never done any home repair or know anyone who has but I almost felt like she was calling contractors stupid! Not to mention that she refurbished the whole home by herself. Without any knowledge of how. Not an easy feat. I didn't feel it was believable.

OK, back to the story. Kelly spends time refurbishing the old farm house with owner--and all star professional football player--Robby. They get to be friends. Which I loved, but there were several moments that scenes could have been pushed further. They were always being held at arms length. I realize the point is to create a longing and tension between the couple. But I honestly didn't feel it. They were just friends. There could have been several "moments" that they should have almost kissed or held hands or all manner of showing a bit more feelings toward one another, other than friendship. But we weren't taken that way. I felt that the scenes really called for it. We were practically drawn to these conclusions that never happened. I would have liked to have seen--and felt--more of that from the main characters. It should have happened. Two single people in the middle of nowhere...why haven't they been trying to get together?!?! WHY?!?!!? Not even a small tiny kiss???!!

I really did like the book. It was cute. I liked the characters and I liked the farm house. I have a great picture in my mind of it and I wish I owned it!! The ending was sweet. I wished Kelly didn't fight it so hard. Take the goods and run with it gurl! He's a keeper!!!