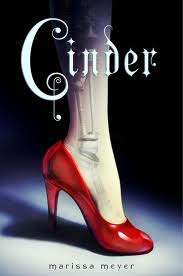 
A special Thank you to Puffin for sending me this book to review.

A forbidden romance.
A deadly plague.
Earth's fate hinges on one girl . . .

CINDER, a gifted mechanic in New Beijing, is also a cyborg. She's reviled by her stepmother and blamed for her stepsister's sudden illness. But when her life becomes entwined with the handsome Prince Kai's, she finds herself at the centre of a violent struggle between the desires of an evil queen - and a dangerous temptation.
Cinder is caught between duty and freedom, loyalty and betrayal. Now she must uncover secrets about her mysterious past in order to protect Earth's future.

This is not the fairytale you remember. But it's one you won't forget.

Review:
Cinderella has been re-told every way possible, why not in science fiction?  The cover is great too isn't it?!


I'm actually blown away at the brilliance of a science fiction Cinderella.  It has everything going for it.  All the elements of the classic fairytale are there, but then there are a bunch of other stuff going on.  It has an Asian setting, there are people living on the moon, cyborgs and androids all over the place, and a deadly pandemic!  It may seem with all those things going on it might be a bit much, but it isn't. Trust me!  It just makes everything so uber cool.


I enjoyed it!  The ending was a bit sad for me, but knowing there are more books makes me believe that Cinder will win this all in the end. There will be a Quartet of books in the series.  I can almost see them each taking on a classic fairytale and being re-told in this science fiction world. I'm so looking forward to Scarlett out next year!

Quote:
"Imagine there was a cure, but finding it would cost you everything. It would completely ruin your life. What would you do?"

Check out a sample of the Audio Book!