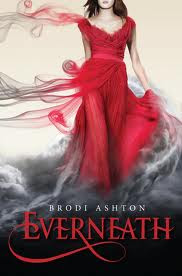 A special Thank you to Simon and Schuster for sending me this book to review.


Last spring, Nikki Beckett vanished, sucked into an underworld known as the Everneath, where immortals Feed on the emotions of despairing humans. Now she's returned- to her old life, her family, her friends- before being banished back to the underworld...this time forever. She has six months before the Everneath comes to claim her, six months for good-byes she can't find the words for, six months to find redemption, if it exists. Nikki longs to spend these months reconnecting with her boyfriend, Jack, the one person she loves more than anything. But there's a problem: Cole, the smoldering immortal who first enticed her to the Everneath, has followed Nikki to the mortal world. And he'll do whatever it takes to bring her back- this time as his queen. As Nikki's time grows short and her relationships begin slipping from her grasp, she's forced to make the hardest decision of her life: find a way to cheat fate and remain on the Surface with Jack or return to the Everneath and become Cole's...


Christy's Review:
I was immediately in love with this book because of it’s cover. It drew me in, I’m not gonna lie. What a stunning piece of artwork. You know the old adage – don’t judge a book… blah, blah, blah. Well I did. And it paid off!

Nikki’s journey through grief, sorrow and back again will be familiar and heartbreaking to anyone who reads it. Jack is the guy every girl hopes to end up with. And Cole… everyone knows a Cole in real life (you know, that guy who is gorgeous, talented, shows sparks of having a soul and being interested in you, but really just wants to suck away your soul!)

I had a hard time putting this book down. And I love that this book was set in Park City, Utah, and it obviously had some religious undertones, but they were very, very light and not solidly Mormon/LDS. This book will go over well with a wide range of audiences of diverse faiths, having a moral center, yet not preaching religion.

Brodi Ashton’s debut work is captivating, well-constructed and a pleasure to read. Her characters are beautifully crafted and engaging, and the storyline is unique and believable. I can’t wait for the sequel!


Mary's Review:
I'm a cover lover, and this cover is gorgeous! Isn't it?! I was sent a paperback advanced copy, and let me tell you, the cover feels like the softest velvet.  Seriously! It feels like velvet! This is probably the most beautiful cover I've seen in a long time!


I was immediately drawn in to this story.  I pretty much don't know anything about Greek mythology. Anything I did know, I lost after I graduated high school. Have no fear though, author Brodi Ashton explains anything you'll need to know to understand the story.  This is probably the most creative book I've read in a very long time.  I loved the modern re-telling of Persephone! I seriously had NO idea how this book was going to end. It could go so many ways, I kept forming several possible scenarios as to what was going to happen next. I was always surprised.


I felt emotional through this book.  It almost feels like this is what one would feel if they were suicidal.  Trapped.  Just wanting the pain to go away.  If there was a way, they'd take it. No matter the consequences.  I was full of emotion.  I just wanted Nikki to be happy. I wanted her to stop hurting, and have the life she wanted.


Bravo to author Brodi Ashton. Her debut novel is a work of art!  I know you'll love it as much as I do!