This summer I read the Fablehaven series at the request of some friends, and I was completely hooked. I haven't been THAT engrossed in a series since Twilight & Harry Potter. The world that Brandon Mull created is one I would LOVE to live in, and something I couldn't stop thinking about. Let me introduce you to Brandon Mull. 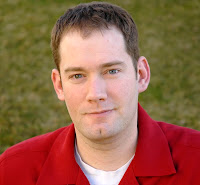 Brandon Mull resides in a happy little valley near the mouth of a canyon with his wife and three children. He spent two years living in the Atacama Desert of Northern Chile where he learned Spanish and juggling. He once won a pudding eating contest in the park behind his grandma’s house, earning a gold medal. Brandon is the author of the New York Times bestselling Fablehaven series and The Candy Shop War.

I often kept the desire secret, because I knew that succeeding as a novelist would be a challenge, and I didn’t want people worrying about me or thinking I was crazy. As a kid, I lived in my head a lot, making up adventures, and sometimes sharing my imaginary games with siblings and friends. For as long as I can remember, I’ve always spent a huge portion of my free time daydreaming and making up stories. As I aged, those stories became more elaborate and compelling, and I decided that I wanted to share them with others. That was when I became serious about writing.

so through high school and college I mostly practiced by writing short fiction. After graduating from Brigham Young University in 2000, I started working on my first full-length novel. It was rejected by many agents and publishers before an editor at Shadow Mountain Publishing found promise in it. Shadow Mountain did not purchase that first book, but they asked to see something else, and the book I wrote for them was Fablehaven. So Fablehaven was published by the first publisher who saw it, after I did a lot of work shopping around that first book. The first book has not yet been published, but I expect to rewrite it someday and show it to publishers again.

with how quickly it found an audience. It seemed that wherever the book got a start, good word of mouth followed, and soon I had a career. I had been working writing marketing copy to pay the bills, but was able to quit my day job about six months after the first Fablehaven was published. By then I had already written the sequel to Fablehaven, so I started on The Candy Shop War, since my publisher didn’t want more than one Fablehaven title per year.

I am now contentedly living my dream. Between writing and promoting, I work more hours in a week than I ever have, but I am passionate about the work. I love my wife and kids a ton, and am relieved to be supporting them by doing a job I adore.

All information is from www.brandonmull.com