Review:: Measuring Up by Nyrae Dawn 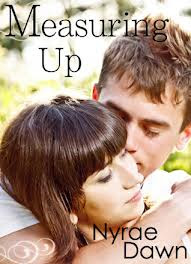 Seventeen-year-old Annabel Conway is tired of the Hillcrest High School elite making her life miserable because she’s not a size two. This summer, she's hiring a personal trainer to help her lose weight. Annabel doesn’t expect her trainer to be a gorgeous guy around her age. Boys like Tegan are jerks. They pretend to like girls like her so they can make an idiot out of them. Been there, done that. Totally not going there again. She kind of hates him on principal. Blond. Muscular. Funny. It doesn’t help that he knows her measurements!Soon, Tegan's so much more than that. He’s the boy who teaches her to box when she has a bad day. Who jogs with her and lets her set the pace. Who kisses her until she melts. He makes her feel beautiful regardless of what the scale says. Unlike her mom, he doesn’t expect perfection, and he doesn't try to shield her from the world like her dad and best friend. Tegan likes her the way she is.But what happens when he’s not there? He can’t always be there… Will Annabel be able to stand on her own and learn that she already measures up? That her worth doesn’t lie in what the world thinks, the scale says, or even what Tegan tells her—but in herself?

Review:
The preface of this book really made me eager to read it. I was the fat girl in high school so I knew I'd identify with Annabel. Or somewhat at least. She's made fun of and doesn't really fit in. I'll admit it though, I did not like Annabel in the beginning. It wasn't just her inner dialogue that got to me but the lack of self esteem she would throw out to others. I had to think back and see if that is what I sound like. It was beginning to make me depressed. In my experience, being fat makes you compensate with a super awesome personality. I felt Annabel was being overly negative all of the time. It was getting me down. But, she got better. Don't worry. I do think this shows what a difficult time overweight people have with their inner struggle. It's more than being fat.

Back to the story...This is what every overweight girl who ever lives wished would happen to her. Measuring Up is a sort of the evolution of Annabel. She isn't just losing weight, she's changing inside and out. Her relationships change from friends, parents, boyfriend, and people who were mean to her. Everything shifts and changes along with her. It's a coming of age tale really.

I'm glad that Annabel got what she wanted. I'm glad that Tegan wasn't a jerk and he liked her from the beginning. This is every girl's dream come true. I really liked Tegan and I wouldn't mind another story with him or maybe a few chapters from his point of view. He's a very likable character. I am really not a fan of teen sex though. Maybe I'm old fashioned or just naive but I just don't see a girl who has never had a boyfriend having sex so soon. I just don't find it realistic. I also don't think we should normalize teen sex. OK, maybe it happens but I don't think it should. I wanted to slap Annabel around and tell her to keep the goods to herself for awhile. She was too young.

Overall, good story. Enjoyable and heartbreaking at the same time. I easily stayed interested and didn't want to stop reading until I was finished. Really good. Made me want to go work out by the end. Ha!