A Word on Harry Potter 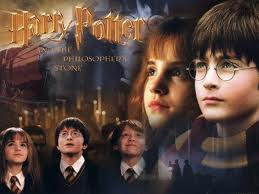 I remember the first time I'd ever heard the name Harry Potter. Do you? It was 1999 and I was working as a waitress at Applebee's while in college. I was serving a mother and son and while the Mom was on her cell phone the young boy was reading a large-ish book {large for someone his age--I thought}. I told him, "That's quite a big book now isn't it?" His reply, "It's Harry Potter."

I went home wondering who was Harry Potter? I even called my mother and told her about the big-ish book and she said,"I bet it's Harry Potter." Who was this Harry Potter?! My Mom told me I could borrow her book. She's an uber cool reader.

I picked it up and had no idea what it was about. But, I zoomed right through. This book was amazing! I'd never read anything like it! I'd read the first 3 books in just a few days and I was hungry for more. But, there were no more...yet.

When Harry Potter and the Goblet of Fire was released I was boarding a cruise ship to work for the Thanksgiving holiday. I would be cruising the Caribbean. I read Harry Potter instead of enjoying my surroundings! I was so hooked.

I remember going crazy over the films and so did the world! We'd never had anything like Harry Potter before.

Life got in the way and I'd not finished the last 2 books in the series. I wouldn't let myself watch the films either so I wouldn't be spoiled. But, I felt like a was a Harry Potter fan traitor because I had yet to finish the series. What was wrong with me anyway?

I wanted to read them but felt I needed to start from the beginning so I could get fully engrossed in the story again. This spring was time. It was suggested to me {by Good Books and Good Wine} to listen to the audio books.  My husband got them for me and I decided to give them a go.

I listened while I cooked, cleaned, and walked with the baby. I was finding myself cleaning just so I could listen to more Harry Potter! It was like reading them for the first time. I started out with Jim Dale's narration {which is by far the best} but switched to Stephen Fry's narration mid series. My husband got me a mix by accident.

Once I finished a book I would then enjoy the film. My husband was beginning to think I was obsessed. I told him they were just long books and films. But, yes I was a bit obsessed. How could anyone not like Harry Potter?!

Now I'm all finished. I feel a loss. Harry Potter is probably the best series I've ever read in my life. Bar none. Nothing compares. The crafting of the world and its character's in unlike any story out there. Pure brilliant.

I will miss your Harry Potter. But when ever I want to return to Hogwarts, I will just open your pages. I know you'll always be there to welcome me home.