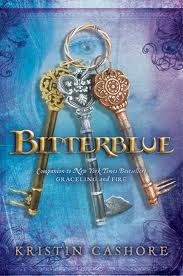 Bitterblue by Kristin Cashore
Synopsis
Eight years after Graceling, Bitterblue is now queen of Monsea. But the influence of her father, a violent psychopath with mind-altering abilities, lives on. Her advisors, who have run things since Leck died, believe in a forward-thinking plan: Pardon all who committed terrible acts under Leck's reign, and forget anything bad ever happened. But when Bitterblue begins sneaking outside the castle--disguised and alone--to walk the streets of her own city, she starts realizing that the kingdom has been under the thirty-five-year spell of a madman, and the only way to move forward is to revisit the past.

Two thieves, who only steal what has already been stolen, change her life forever. They hold a key to the truth of Leck's reign. And one of them, with an extreme skill called a Grace that he hasn't yet identified, holds a key to her heart.

Christy's Review
I've been waiting for Kristin Cashore's newest Graceling installment for quite some time. I love her writing style and the worlds and characters she creates. Everything/everyone is so full of life and fighting spirit in her stories. Bitterblue is a compelling read about a girl, and a kingdom, in recovery after a devastating tragedy (in the form of King Leck). Great attention to detail is paid to puzzles and ciphers and discovery, and the way Queen Bitterblue evolves as a capable human being is completely believable. That said, I'm having a hard time figuring out what the point of telling this story was in the first place. It's a very introspective story, more about self-discovery than anything truly relevant to the Graceling world. The bits about the seven kingdoms and discoveries seem almost casually thrown in. The love story between Saf and Bitterblue was a realistic exploration of first love, but in the end it bothered me, and I thought another potential spark (did I just imagine there could have been something between Bitterblue and Giddon? The setup was perfect!) was left unexplored and it was a dissappointment.
Don't get me wrong - this book is really well written. The amount of research and time Cashore obviously threw into research and planning on the puzzles is admirable. And I like the characters. But, like I said before, I just don't really see what relevance this book has in the overall scheme of the Graceling world. The movement in the overall plot (about the Seven Kingdoms and Gracelings) could have been explored easily in a few pages in any book. This was a lovely tangent, Miss Cashore, but I really hope your next book gets back on track with the world nd storylines you so carefully crafted in Graceling and Fire.