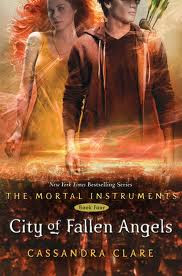 Summary:
Who will fall in love, and who will find their relationship torn apart?
Who will betray everything they ever believed in?

Love. Blood. Betrayal. Revenge.
In the heart-pounding fourth installment of the Mortal Instruments series, the stakes are higher than ever.

Review:
This book is a second phase in the series.  It starts 6 wks after City of Glass.  But there are different stories being told, and the focus isn't soley on Clary and Jace.  I would say this is Simon's story.  He is learning to be a vampire, and also trying to live a normal life.  Which is hard to do and causing a lot of problems.  Clary and Jace are still here and are having their own relationship struggles.

I'll say this wasn't my favorite in the series at all, but it was still good.  I almost feel like if you are going to resurrect a series to have another 3 books, you'd better have a good reason.  I'm hoping the next 2 books, yet to be released, will be much better.  I thought there was so much going on here, too many different stories.  I wasn't glued to this as I was the other books in the series.  But I still love anything that has to do with Jace and Clary, so I loved all their interaction in this book. It was still good, but not the best.