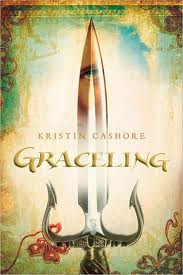 
Katsa has been able to kill a man with her bare hands since she was eight—she’s a Graceling, one of the rare people in her land born with an extreme skill. As niece of the king, she should be able to live a life of privilege, but Graced as she is with killing, she is forced to work as the king’s thug.
When she first meets Prince Po, Graced with combat skills, Katsa has no hint of how her life is about to change. She never expects to become Po’s friend. She never expects to learn a new truth about her own Grace—or about a terrible secret that lies hidden far away . . . a secret that could destroy all seven kingdoms with words alone.


Review:
I didn't really know much about this book when I started reading it, only that my sister and a friend told me I needed to read it.  So, it was one of the first purchases on my new kindle! Which I love by the way.

This was a really great book!  The character's were strong and well formed.  I thought the plot was well thought out and developed.  I really felt like I was Katsa out in the wild! I really like  strong women leads and Katsa was a kick butt killing machine!! She and Po were my favorite.  I've got a soft spot for Po now.  I kind of like him.

I'm all about some romance, and this book did have a little bit of it.  I would have loved some more, but what was there was good.  One thing I didn't like was that Katsa was so against marriage.  What's the problem?!

Quote:
"She shivered as he left her to go to the fire, and find water and cloths. He leaned into the light, and brightness and shadows moved across his body. He was beautiful. She admired him, and he flashed a grin at her. Almost as beautiful as you are conceited, she thought at him, and he laughed out loud."