This summer I grabbed up Knife by RJ Anderson and was quickly swept up in her faery world. I can't wait for the second installment to her series coming to the UK in January! I want all of you to know about her. You MUST pick up her debut book! She is a hidden gem.

Let me introduce you to R J Anderson! 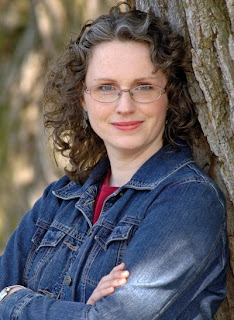 R J Anderson (known to her friends as Rebecca) was born in Uganda, raised in Ontario, went to school in New Jersey, and has spent much of her life dreaming of other worlds entirely.

As a child she immersed herself in fairy tales, mythology, and the works of C.S Lewis, J. R. R. Tolkien and E. Nesbit; later she discovered more contemporary authors like Ursula LeGuin, Patricia A. McKillip, and Robin McKinley, and learned to take as much pleasure from their language as the stories they told.

Now married and a mother of three, Rebecca reads to her sons the classic works of fantasy and science fiction that enlivened her own childhood, and tries to bring a similar sense of humor, adventure, and timeless wonder to the novels she writes for children and young adults. She currently lives in the beautiful theatre town of Stratford, Ontario.