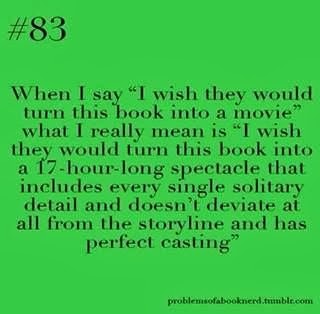 Years ago whenever I would read a really good book I would just wish I could see it on the big screen. I wanted to see my favourite characters come to life. Not just in my head but actually be real. It would become something tangible. I could revisit the story whenever I wanted and instead of having to read the whole book I could just spend 2 hrs and get my fill. It would be bliss right?

I've never been a person to get upset when the movie isn't exactly like the book. I have always felt that the film is just another chapter in a story I love. It just adds a dimension to it. But as of late I am wishing for those days when books stayed books {with the exception of Harry Potter}. Where I could just picture everything in my head and leave it at that. My favourite characters would look just how I pictured and the story wouldn't be compromised in any way.  I've seen too many books ruined by their film. It's a tragedy. What's wrong with just staying a book?

Last night I watched Saving Mr. Banks. That's the movie about the author of Mary Poppins. Oh my gosh did I love it. I was laughing, crying, happy, heartbroken and satisfied. I felt all the feels. I understood a little more about the story than ever before. I just loved it more than I can really say. It made me wish every story had a film that showed us the backstory instead of the written story. Know what I mean?

Sometimes books make awesome movies. Sometimes those movies make me upset that Hollywood got it so wrong. Sometimes the backstory just pulls everything together for me and it makes me love these two worlds so much. It is what it is. When books become movies anything can happen. I think that's why we want to see them on the big screen. We're hoping for a film to get it right.