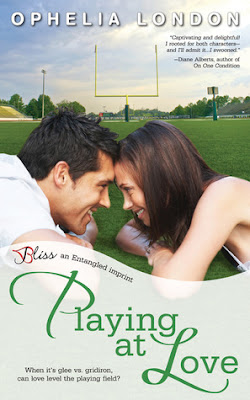 Show choir teacher Tess Johansson loves three things: music, her job, and sharing that passion with her students. But when a school budget crisis forces funding to be pulled from either the sports or music programs, she finds herself going head to head with Jack, the gorgeous new football coach who broke her heart fifteen years ago.Jack Marshall wants two things: to be closer to his young daughter and to make his mark as a football coach. Taking the new job, with the promise that he’d have time to build a solid team, gave him both. But now he must win the season with a group of boys who aren't anywhere near ready or he’ll lose everything he’s worked so hard for. Being pitted against Tess, the summer love he never forgot, is like being fourth and long with only seconds on the clock.On opposing sides of a fierce battle and with everything at stake, Tess and Jack find themselves torn between doing what it takes to win and doing what it takes to be together.

Review::
I'm so addicted to these BLISS books. They are just fun. Playing at Love sounded like a cute book and I really like cutesy books.

I really enjoyed the romance. And isn't what this story is really about?! Tess and Jack knew each other way back when. First kiss and all that.

It's a stand off. Football vs Choir. Whomever wins gets to keep the program at the high school. The other has to go. There were a few details that were shaky with me about this. The principle said he didn't want parents and tax payers throwing money at the problem because that wouldn't actually help. But, I couldn't see why it wouldn't. The problem was that the schools reserve had been wiped out. Why wouldn't money solve the problem?? What exactly was the problem if it wasn't money? Also, why not cut other programs that weren't such an integral part of the community. I wasn't sure the details were really thought through there. It took away from the story for me. I like things to be plausible--realistic.