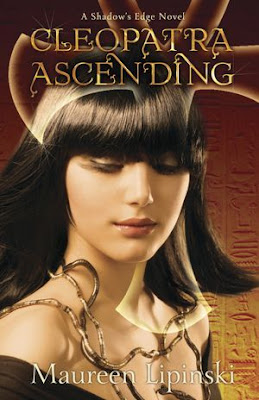 Sweet Sixteen = You're a Queen
Despite living with a shaman, a witch, and a muse for sisters, Rhea Spencer feels like a normal teenager-even if she is the reincarnation of Cleopatra. But all that changes on Rhea's sixteenth birthday, when her visions of the Egyptian queen start unraveling a very different version of history, and Declan, a hot representative of the secret Order of Antony, shows up on the doorstep to keep her from being kidnapped. Together, Rhea and Declan travel to Egypt to stop the Octavians, a dark cabal trying to tap into Rhea's growing powers. The cabal seeks to access the magic deep below the desert sands, a potentially devastating force that only Rhea can protect.

Christy's Review:
I love books about ancient Egypt and Egyptology, so I was really excited to read this book, simply from the title/cover art. This book had a LOT of potential. A great premise, a captivating cover… but to be honest, I was let down by the story. There was a lot going on in. Tons of subplots, tons of characters and intersecting universes (too many, in my opinion). Overall, I loved the concept and I really liked Rhea’s character. But there were too many unanswered questions and false starts in the plot line, and the climax of the book was far too short. In fact, the entire book was far too short. It reads like a cliff notes version instead of an actual book. All in all, SO much potential. But too much unanswered, too many gaping holes.

I’d love to see more from this author, but ultimately it needs to be better fleshed out, better planned and better described. Give me the juicy details!