I'm so excited to be a part of The Kissing Tree Blog Tour! I fell in love with this book, and I just know you will too.  Today I've got my review of the book, an interview with author Prudence Bice and an excerpt for you to read.  Enjoy! 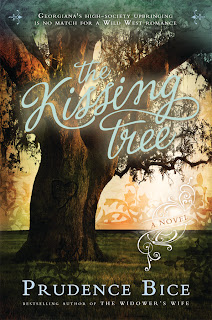 Five years ago Georgiana stole a kiss from Ridge Carson under the community “kissing tree” the day before she moved away. Now eighteen, she finally returns to Colorado to live with her grandfather and help him with the cooking and cleaning on his ranch. Though she was taught how to be a proper young lady and flourish in New York’s high society, her heart never stopped yearning for home—or her childhood crush.

But when she unexpectedly finds herself facing the grown-up Ridge, with his Wild West ways, all her proper training begins to unravel. Now she isn’t sure she can fall for his improper cowboy style.

A special Thank You to Cedar Fort Books for sending me this book for review.

Review:
What can I say?  I loved this book.  I really did.  Every single thing about it.  It just spoke to me.  I'm all about a little bit of period drama, and this was just enough.  I fell for the characters and their charm.  Such a simple story with a love that left me dreaming.

Georgiana is a lady, but she knows how to take care of herself and others.  I love this about her.  I love that she is such a good cook and that is she isn't afraid to help out around the ranch. Riley is a man among men, I could picture him in my minds eye.  I'm still picturing him...Yum!

I loved this so much I immediately went to find if author Prudence Bice had written any other novels.  She has!  I ordered The Widower's Wife immediately on my kindle and WOW did I LOVE it!

If you're looking for a little bit of romance then this is your book.  I'm in love!

1.  For those who haven't read your books, give them a pitch about what they can expect.

They are clean, feel good love stories that will have you laughing, crying, and hopefully swooning a time or two.  They are filled with love, a dash of adventure, sometimes a pinch of tragedy, and plenty of endearing moments to treasure and share.

2.  What do you like most about writing in this historical time period?

There is so much to like about this period of our history: the simplicity, the language, and the graceful way of living.  Men were gentlemen and honored a woman's virtue (at least the good guys).  Women were proper ladies, but still has spunk.  They stood up for what they believed and guarded their own with passion.  Though sometimes times were tough, most were willing to carry each other through it. They worked hard, grieved often, but when it came time to party, they sure knew how to have a party.

3.  What is the best thing about being a published author?  The worst?

I should say the best thing is being able to share my stories with so many people, and that is definitely something that thrills me.  But, I'd have to say the best thing so far is all the wonderful people I've met, young and old.  I'll never forget the first child that timidly walked up to my signing table.  "Are you really an author" she asked.  "I want to be an author someday."  My response, "Just keep reading and writing and one day I'll be on that side of the table and you will be on this side."  After that signing, I went down to Barnes and Noble and bought a little leather bound book.  When ever a child comes up to me, I have them sign and date my book.  "I'll be rich one day, when you make it big and I have your autograph from when you were young" I tell them.  I had a boy come up to me one day when I was doing a second signing in a store and ask to see his autograph to make sure it was still there.  It was.  What a privilege it is to encourage the dreams of children wherever I sign.   In addition, I have met women and men who have touched my life and continue to do so.  I autographed a book for a woman who was dying and a woman who was just beginning to live again.  I even had a ninety year old man purpose to meet me once.  I was undeniably flattered.  What a joy it has been so far.

4.  What are some of your favorite books?

Let's see, this is hard because I am discovering new favorites every day.  I've read a lot of young adult fiction.  One would definitely be Robyn McKinley's, The Blue Sword, then there is Jane Austen's, Pride and Prejudice.  I love the Harry Potter series, and The Hunger Games, and there are many, many more favorites just waiting to be read.

5.  Can you tell us anything about what you're writing next?

I actually have a third book completed that I have been editing.  It is a mid-evil romance, with some fantasy mixed in.  I may set it aside though.  I am considering upping the fantasy part another notch.   I've decided to turn my attention to a different historical novel I've started.  It is about a young immigrant girl who is separated from her father and is reunited ten years later.  It is ultimately a romance, and the hero is a yummy one, but I can't say more than that without giving too much away.

Taking a deep breath, Georgiana let it out slowly as she took another glance up and then back down the boardwalk.  She wanted to see everything at once but it was getting late.  It wouldn't be long before all the businesses were closed up for the night, with the exception of the saloon, of course.

"Oh Grandad." She turned back toward him and hugged her arms around her middle.  "It feels so good to be home."

Thrusting her arms out away from her sides Georgiana spun herself around a couple of times in a moment of pure exhilaration, once again ignoring the assiduous and exacting lessons on how a proper young woman was expected to act in the public eye.

On her second time around, she caught a glimpse of a tall man standing in the road watching her.  Startled she had an attending audience, Georgiana lost her balance and stumbled.  She let of a small scream as she felt herself falling backward off the steps.  There was a look of astonishment on her grandfather's face as he tried to grasp hold of her outstretched hand in an attempt to keep her from falling.  Almost instantly the look was replaced by a grin and a bout of hearty laughter as she felt herself being caught from behind by a pair of long, sturdy arms.


"Whoa there missy," she heard a very deep and inherently masculine voice say.  "That there is not a proper place to be dancin' and prancin' about."  Georgiana gasped as she looked up into the unmistakably familiar, yet grown up face of Ridge Carson.  He smiled and continued as if he hadn't a clue who she was.  "Though, if you're needin' a lesson or two, I might be willin' to give it a go with ya, but definitely somewhere..."  He paused, unabashedly winked at her, and pronounced, "More private."