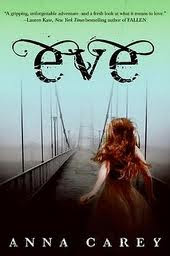 
A special Thank You to Harper Collins for sending me this book to review.
Where do you go when nowhere is safe?
Sixteen years after a deadly virus wiped out most of Earth’s population, the world is a perilous place. Eighteen-year-old Eve has never been beyond the heavily guarded perimeter of her school, where she and two hundred other orphaned girls have been promised a future as the teachers and artists of the New America. But the night before graduation, Eve learns the shocking truth about her school’s real purpose—and the horrifying fate that awaits her.
Fleeing the only home she’s ever known, Eve sets off on a long, treacherous journey, searching for a place she can survive. Along the way she encounters Arden, her former rival from school, and Caleb, a rough, rebellious boy living in the wild. Separated from men her whole life, Eve has been taught to fear them, but Caleb slowly wins her trust . . . and her heart. He promises to protect her, but when soldiers begin hunting them, Eve must choose between true love and her life.


Review:
I enjoyed the book. It has a great plot, and the story line kept me going. I'm new into dystopian fiction, I've not read much, but I love it! The whole idea of the future being bleak and back to basics just really makes the story even more suspenseful. The cover alone made me pick up this book.

Although I enjoyed it, I'm a character development kind of girl. There are some situations where Eve makes decisions that are...out of character! They aren't huge, and maybe people who read this won't even notice. But, I did.

The romance promised isn't as "romantic" as I thought it would be. You know I love the romance. But it was still good. I really like Caleb and can't wait to see more of him.

I didn't like the ending. I felt it was, again, out of character. Not just for Eve, but for human beings. I wish I could say more, but I'm not a spoiler, so I won't! This is going to be a trilogy I think, so there is plenty of time for that "ending" to get better.

I did enjoy it, and I'd still say go pick it up on October 4th when it's published. I liked it! I'm looking forward to getting to know Eve better!