Review: The Power of Six by Pittacus Lore 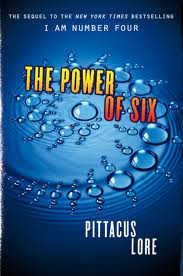 
I've seen him on the news. Followed the stories about what happened in Ohio. John Smith, out there, on the run. To the world, he's a mystery. But to me . . . he's one of us.

Nine of us came here, but sometimes I wonder if time has changed us—if we all still believe in our mission. How can I know? There are six of us left. We're hiding, blending in, avoiding contact with one another . . . but our Legacies are developing, and soon we'll be equipped to fight. Is John Number Four, and is his appearance the sign I've been waiting for? And what about Number Five and Six? Could one of them be the raven-haired girl with the stormy eyes from my dreams? The girl with powers that are beyond anything I could ever imagine? The girl who may be strong enough to bring the six of us together?

They caught Number One in Malaysia.
Number Two in England.
And Number Three in Kenya.
They tried to catch Number Four in Ohio—and failed.
I am Number Seven. One of six still alive.
And I'm ready to fight.
Review:
I was anxiously awaiting the arrival of this book on my kindle.  At last it arrived, and it was worth it.  The book was from two points of view, number Four (John Smith's) and number Seven, a girl living in Spain.  Of course, Six was with John and because of that we got to hear stories of her life and how she became the strong woman she is.  Much was revealed and much was left out.  The one thing I didn't like was that the book had a bit too much action.  I love to watch action on the big screen but in a book it doesn't translate over so well for me.  Some people may love the book for this reason, so to each his own.  Overall it was quite enjoyable with new exciting reveals and intrigues.  What will happen with John and Sarah?  What will happen with John and Six?  Will John ever receive any more legacies?  Do they stand a chance against the Mogs?   Those were just a few of the questions I had after finishing the book.  Now I have to wait for book #3.  I have to admit, I wish I knew where Pittacus Lore was so I could hit him up for the next novel!