I'm heading to Tarragona, Spain today guys! I've been thinking about which books I wanted to bring and it got me thinking about what my favorite beach reads for the summer have been so far. I've compiled a list of my top beach reads for the summer. Some are not out until the end of the summer, while some are already on the shelves! I hope you'll pick some of these up for your summer holiday!

Spells by Aprilynne Pike
In this second installment of a series that started with the best-selling Wings (2009), Laurel, who recently discovered she is a faerie, finds herself completely immersed in her new world when she begins studies at the Academy at Avalon. There she can spend more time with Tam, the faerie who is hopelessly in love with her, and also learn about the benefits and burdens her heritage entails. But the action really begins when she returns home. The trolls that stalked her in the previous book are more dangerous than ever, and this time Laurel is not the only one being targeted. At the heart of that conundrum is the affection she feels for both her earthly love, David, and the deliciously different Tam.

The Summer I Turned Pretty by Jenny Han
Belly measures her life in summers. Everything good, everything magical happens between the months of June and August. Winters are simply a time to count the weeks until the next summer, a place away from the beach house, away from Susannah, and most importantly, away from Jeremiah and Conrad. They are the boys that Belly has known since her very first summer -- they have been her brother figures, her crushes, and everything in between. But one summer, one wonderful and terrible summer, the more everything changes, the more it all ends up just the way it should have been all along.

It's Not Summer Without You by Jenny Han
Can summer be truly summer without Cousins Beach? It used to be that Belly counted the days until summer, until she was back at Cousins Beach with Conrad and Jeremiah. But not this year. Not after Susannah got sick again and Conrad stopped caring. Everything that was right and good has fallen apart, leaving Belly wishing summer would never come. But when Jeremiah calls saying Conrad has disappeared, Belly knows what she must do to make things right again. And it can only happen back at the beach house, the three of them together, the way things used to be. If this summer really and truly is the last summer, it should end the way it started--at Cousins Beach.

Can You Keep a Secret by Sophie Kinsella
Things are suddenly starting to look up for the hapless but optimistic Emma Corrigan. She has kept her job at Panther Cola for nearly a year, has the perfect boyfriend and hopes for a promotion to marketing executive should her first opportunity to strut her stuff and land a business deal be successful. Unfortunately, things don't go quite as planned, and on her unusually turbulent return flight from a disappointing client meeting, in a terrified state, she confesses her innermost secrets to the good-looking stranger sitting beside her. When she shows up at work the next morning, she is horrified to discover that her mystery man is none other than the revered and brilliant Jack Harper, American CEO of Panther Cola, on a weeklong visit to the company's U.K. branch. Thus begins a series of chaotic, emotionally exhausting and funny episodes that thrust Emma, with her workaholic best friend, Lissy, and their awful flatmate Jemima, into a world of fairy tales, secrets and deceit.

Mockingjay by Suzanne Collins (Aug 24, 2010)
Against all odds, Katniss Everdeen has survived the Hunger Games twice. But now that she’s made it out of the bloody arena alive, she’s still not safe. The Capitol is angry. The Capitol wants revenge. Who do they think should pay for the unrest? Katniss. And what’s worse, President Snow has made it clear that no one else is safe either. Not Katniss’s family, not her friends, not the people of District 12.

The Sky is Everywhere by Jandy Nelson
Seventeen-year-old Lennie Walker spends her time tucked safely and happily in the shadow of her fiery older sister, Bailey. But when Bailey dies abruptly, Lennie is catapulted to center stage of her own life - and, despite her nonexistent history with boys, suddenly finds herself struggling to balance two. Toby was Bailey's boyfriend; his grief mirrors Lennie's own. Joe is the new boy in town, with a nearly magical grin. One boy takes Lennie out of her sorrow, the other comforts her in it. But the two can't collide without Lennie's world exploding...

Fallen by Lauren Kate
There's something achingly familiar about Daniel Grigori. Mysterious and aloof, he captures Luce Price's attention from the moment she sees him on her first day at the Sword & Cross boarding school in sultry Savannah, Georgia. He's the one bright spot in a place where cell phones are forbidden, the other students are all screw-ups, and security cameras watch every move. Even though Daniel wants nothing to do with Luce--and goes out of his way to make that very clear--she can't let it go. Drawn to him like a moth to a flame, she has to find out what Daniel is so desperate to keep secret . . . even if it kills her.

Of Witches and Warlocks by LM Weatherford
Portia Mullins had always lived the life of a normal teenager, up until her sixteenth birthday. She is then informed by her grandma that she is actually a witch who is a descendant from a long line of witches and warlocks. After overcoming her disbelief she finds that being a member of the coven comes with one great perk in the form of the school's handsome bad boy, Vance Mangum. Vance and Portia have an immediate connection as a budding romance begins, only to be threatened by turbulent skies on the horizon as Vance's checkered past rears its ugly head to haunt them. Portia is forced to use her untried powers in defense of everything she loves in a desperate attempt to hold on to the one thing that really matters in her life.

Wintercraft by Jenna Burtenshaw
Ten years ago Kate Winters’ parents were taken by the High Council’s wardens to help with the country’s war effort.

Now the wardens are back...and prisoners, including Kate's uncle Artemis, are taken south on the terrifying Night Train. Kate and her friend Edgar are hunted by a far more dangerous enemy. Silas Dane – the High Council’s most feared man – recognises Kate as one of the Skilled; a rare group of people able to see through the veil between the living and the dead. His spirit was damaged by the High Council’s experiments into the veil, and he’s convinced that Kate can undo the damage and allow him to find peace. The knowledge Kate needs lies within Wintercraft – a book thought to be hidden deep beneath the graveyard city of . But the Night of Souls, when the veil between life and death is at its thinnest, is just days away and the High Council have their own sinister plans for Kate and Wintercraft. 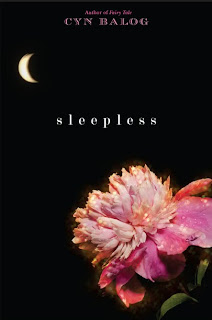 Sleepless by Cyn Balog (July 13, 2010)
Eron DeMarchelle isn't supposed to feel this connection. He is a Sandman, a supernatural being whose purpose is to seduce his human charges to sleep. Though he can communicate with his charges in their dreams, he isn't encouraged to do so. After all, becoming too involved in one human's life could prevent him from helping others get their needed rest. But he can't deny that he feels something for Julia, a lonely girl with fiery red hair and sad dreams. Just weeks ago, her boyfriend died in a car accident, and Eron can tell that she feels more alone than ever. Eron was human once too, many years ago, and he remembers how it felt to lose the one he loved. In the past, Eron has broken rules to protect Julia, but now, when she seems to need him more than ever, he can't reach her. Eron's time as a Sandman is coming to a close, and his replacement doesn't seem to care about his charges. Worse, Julia is facing dangers she doesn't recognize, and Eron, as he transitions back to being human, may be the only one who can save her. . . .Even once they've become human again, Sandmen are forbidden to communicate with their charges. But Eron knows he won't be able to forget Julia. Will he risk everything for a chance to be with the girl he loves?