Start Your Day With Serial: The 13 to Life Blog Tour 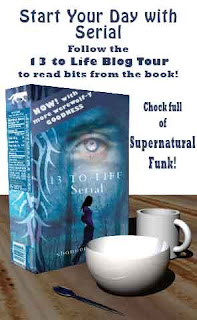 Welcome to Shannon Delany's Start Your Day with Serial Tour! Shannon's debut novel (and first in her YA paranormal series) 13 to Life started as a winning cell phone novel written in serial segments. During the tour you can read bits of the book in order. Miss a day? Hop to Shannon's blog http://13toLife.us/blog and check the link to the blog tour calendar in her sidebar.

Something strange is stalking the small town of Junction…
When junior Jess Gillmansen gets called out of class by Guidance, she can only presume it’s for one of two reasons. Either they’ve finally figured out who wrote the scathing anti-jock editorial in the school newspaper or they’re hosting yet another intervention for her about her mom. Although far from expecting it, she’s relieved to discover Guidance just wants her to sho w a new student around—but he comes with issues of his own including a police escort.

The newest member of Junction High, Pietr Rusakova has secrets to hide--secrets that will bring big trouble to the small town of Junction—secrets including dramatic changes he’s undergoing that will surely end his life early.

13 to Life: Chapter 4, part I (used with the author’s permission)

Shannon's debut novel, 13 to Life, launched exactly 1 week ago today. If you haven't had a chance to read it, Shannon says it's available at almost every bookseller (both online and in person) and she encourages you to spend your money with a company whose policies you respect. Find out more about Shannon and her YA paranormal series at http://ShannonDelany.com or http://13toLife.us/blog or follow her on Twitter at http://Twitter.com/Shannon_Delany .
**************************************************
Shannon's hosting several contests during the Start Your Day with Serial Tour. The big contest will award one lucky winner with a royal amber pendant, pietersite jeweled bookmark, stuffed wolf, mousepad, pen, tote, signed poster, personalized copy of 13 to Life pins. All you need to do is comment at 13 of the blogs hosting Shannon during her 30 day tour. Everyone who does so will be entered into a random drawing. Winner may be international. 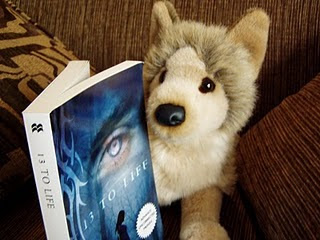