Why Read The Classics?

I have asked my friend Heidi from Austen Knows Best to be my guest blogger today! Thanks for being with us today on The Sweet Bookshelf Heidi!! 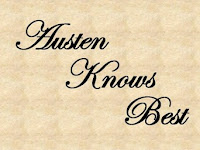 Long-time friend Mary—I can’t believe we’ve known each other for 18 years!—has asked me to write a guest post for her blog The Sweet Bookshelf. I’m honored and thrilled to be asked, and I smile at my topic: The Importance of Reading the Classics. I’m not sure she knew just exactly what she was getting into by asking not only a librarian, but one who also was an English major undergraduate. I certainly have my views on this, and I am delighted to share them!
To start off with, I should probably warn that I am two-sided on this issue. Not that I haven’t made up my mind about it. I just have two views which, without closer inspection, would look to be in complete opposition. Yes, that is right. I am for the reading of classics, and I am against the reading of classics.

Let me define my definition of a classic, since varying teachers, professors, librarians, authors, and others of the book world tend to alter and contradict what they believe a classic is. When I refer to reading the classics, I prefer the old-fashioned notion which means novels written prior to at least 1950 (though preferably before the 20th century) which have stood the test of time. They did not peter out into obscurity, and they are fairly accessible compared to their distant relations that struggled for breath and recognition as the decades wore on. That right there provides for a very large collection, which is why I do not like to categorize books from the last 50ish years because to me they are contemporary and have not been around long enough to prove their status as classic.

This, of course, is not to be confused with my phrasing “What a classic!” when referring to books that portray or convey various things in ways that greatly appeal to me. Some examples: Speak by Laurie Halse Anderson, Tuck Everlasting by Natalie Babbitt, The Giver by Lois Lowry, and Ella Enchanted by Gail Carson Levine. I do realize those are all Juvenile-YA titles, but that’s the kick I’ve been on for the last few years…or my whole life.

So with the clarification of classic, I can move on to why yes and why no. First, the yes.
These books have stood the test of time and I think that helps them deserve some consideration on our part as to why and how some of them have. Why did people keep reading these titles? What fascinated (or disgusted) people over the years? There must be something about these books that kept them being talked of—even if it was from complete hatred of the book!

The discussions that spawn from reading classics are another great reason to read. Every one has an opinion. Why not share it? Classics, having been around for so long, have a much better chance at being read by more people around the world over a longer period of time. You can not only read what someone thought of Dickens’ novels in his day, but in all the 180+ years since. The connective discussions are wonderful to take part in and to learn from.

I personally find it amazing that literature which has been around for decades or even centuries can and is related to society and circumstances in our day. I have always been a fan of universal themes, and classics abound in them. It is probably one reason they have stood the test of time. You can see books in our generation that have those and are heading down the road to eventual classics status (like the aforementioned The Giver). Connecting with others through reading is one of the main reasons, I think, that we read—and classics provide an excellent resource for us to do so.

As for my opposition to reading the classics? Well, that goes more in hand with forcing anyone to read what they do not enjoy. (Shannon Hale has an excellent take on this, and I mostly rallied to her cause and views when I first heard her speak of it in 2006.) Where would this happen? School, of course. Poor teachers who must reach a broad range of students and select books that might appeal to all. If it didn’t appeal to you, tough luck. I fortunately lucked out in most of the choices my teachers came up with. Half of them were books I had planned to read on my own anyhow, so it gave me an excuse to read them sooner. Plus, I was a new discoverer of classics and hungered for more of this genre. Up to that point, I got my reading recommendations from “Wishbone,” so I was ecstatic to have my teachers introduce more options to me.

But what of my poor classmates? Those who preferred other genres and those who (gasp!) didn’t like to read? Those books were nightmares for them! They didn’t understand the language, whereas I—being raised reading King James’ English—wasn’t phased by it. Plots were too intricate, characters were too many, and outcomes often made them feel as if they’d wasted days of their lives to end up with nothing fulfilling or uplifting. In short, they just didn’t “get it.” And because they hated the experience, they could not form any opinions of the book, only opinions of the forced reading of it.

Remember how I said the classics have universal themes that bind people together in their discussions of them? That is still needed, and for that I understand, sanction, and herald the importance of having people read the classics. But give them more of a choice! Tailor to their needs until they’ve acquired a taste for it. You don’t give a starving man a banquet for his first meal. A bit of bread and water, some meat eventually. Work him up to it. The same should be done when getting people to read the classics. In the library world, we call it Reader’s Advisory. It’s many a librarian’s hope to work people up from the “lower” books (which serve their purpose) to the more intellectually stimulating with their universal themes that await discussion.

Thousands upon thousands of classics, and yet we still recommend some of the most droning, depressing, drudging works that could exist among the classics. I guarantee there will be any number of classics that someone will dislike and even hate in their lifetime. I certainly have my fair share. We want people to discover those; they must discern for themselves, and sometimes those are the ones we can talk most passionately about. But give readers stuff they will enjoy at the beginning. When a baby first eats solid foods, we don’t force down their throat the stuff they spit back out. We give them something else more palatable to them. But as the child gets older, we are more firm and insist they eat the less delectable when we know it’s good for them. They may not like it, but they’ll benefit from it. It is the same with the classics, and other literature, too.

Along the same food analogy, though, keep giving them choices. And rewards. I hated Hawthorne’s The Scarlet Letter, but I got a lot from it and right after was rewarded in getting to read Shelley’s Frankenstein. I had my choice between Swift’s Gulliver’s Travels and Toni Morrison’s Beloved (though not my definition of classic, it was considered as so by others and still required reading that summer). Though I was pretty sure I’d be rather bored by both, I knew I could handle the content of the former better than the latter. As I was taught more of the classics, I was also taught how to pick and choose what I would gain most from.

Eventually, with good introduction and training, you send the reader off on their own to make reading choices for themselves. If they do not like the spinach books, they do not have to read them. But a wise reader will know that the carrot books are also nutritious and personally enjoyable to them. Some readers will go for the all-junk-food book diet. They will find enjoyment, no doubt. And can even sustain life on it. But it will not be as full and fulfilling a life without a well-rounded, balanced book diet that includes the classics.

What do YOU think?!