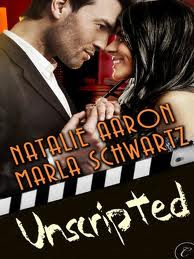 
A special Thank you to my friend Catriona for taking the time to review this book for us!

As a producer on a reality dating show, Abby Edwards knows that true love is a myth. Her career and her friends are all she needs. Right?

When her screenwriter ex makes a hit movie based on their relationship, Abby's faults are projected on screens across the country. Suddenly the fact that her job depends on orchestrating hot tub hook-ups doesn't seem so impressive.
Her friends rally to help. Zoë thinks she needs to meet a guy. Stephanie suggests an attitude adjustment. Nancy wants her to get in touch with her inner Goddess. Abby knows they mean well, but she prefers to focus on her work. Unfortunately, she's already embarrassed herself in front of her new boss, Will Harper, who she would find totally crush-worthy if he weren't so irritating.

Abby's about to be reminded that life doesn't follow a script—and good things happen when you least expect it...


This book had my attention captured right from the first page with its mix of fast paced plot and likeable characters. The story is told by Abby, who works freelance in reality TV, and takes you through her various jobs and the trials and tribulations that are involved in freelance work and, more specifically, work in reality TV. This is interspersed with scenes involving nights out with friends and the relationship with her best friend who is also her roommate.
Even if you are not into reality TV, the parts of the book that deal with Abby’s job and what’s going g on in the particular show are highly entertaining and full of chick-lit style capers and dilemmas and I really enjoyed this aspect of the story, like a little TV break every couple of chapters! Abby’s personal life, her living and financial situations also include the kinds of trials and tribulations that usually accompany the heroines of this genre. She is highly relatable as a character and the personal dramas that she goes through, I found myself identifying with and could sympathise emphatically with some of the “social gatherings” her friends drag her along to.
Although the story is quite lengthy, in retrospect, the narrative never drags and I think that this is due to the witty personalities of the characters and the realistic nature of the story-line. This is definitely the kind of book that most chick-lit lovers will enjoy as much as I did.