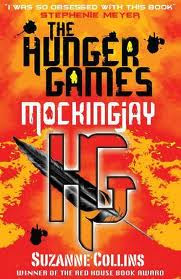 Katniss Everdeen, girl on fire, has survived, even though her home has been destroyed. Gale has escaped. Katniss's family is safe. Peeta has been captured by the Capitol. District 13 really does exist. There are rebels. There are new leaders. A revolution is unfolding.

It is by design that Katniss was rescued from the arena in the cruel and haunting Quarter Quell, and it is by design that she has long been part of the revolution without knowing it. District 13 has come out of the shadows and is plotting to overthrow the Capitol. Everyone, it seems, has had a hand in the carefully laid plans -- except Katniss.

The success of the rebellion hinges on Katniss's willingness to be a pawn, to accept responsibility for countless lives, and to change the course of the future of Panem. To do this, she must put aside her feelings of anger and distrust. She must become the rebels' Mockingjay -- no matter what the personal cost.
Review:
If you know me you know I'm crazy about The Hunger Games. Never have I been so engrossed in a series and read a book so many times.  I've waited and waited for Mockingjay to be released. I asked off work 6 months ago to read it on the day with no distractions. I wanted to know the ending to this trilogy and I had in my mind what I wanted to happen.

This book didn't live up to my expectations. Don't hate me! It just didn't. My favorite characters were changed, it was as if I never knew them. There was too much depression, war, and politics. Katniss is a pawn more than ever, and I felt like she had taken a stupid pill or something. Not the strong Katniss that I knew. The ending was rushed, and didn't live up to anything I had hoped. It was as if the author knew what we all wanted and refused to give it to us.

I read the book twice, and it was a bit better the second time. But not by much. I'll still love this series. But Mockingjay is better left of the shelf for me.

Quote
"Finnick?" I say, "Maybe some pants?"
He looks down at his legs as if noticing his outfit for the first time. Then he whips off his hospital gown leaving him in just his underwear. "Why? Do you find this"- he strikes a ridiculously provocative pose -"distracting?"